This highway predates the Interstate system, but just barely. Phoenix and the state started upgrading AZ 69 to a controlled access highway through Phoenix. In the early 50s, AZ 69 was rerouted from 27th Ave. from Grand Ave. to Dunlap Ave. (then Olive Ave.) along a 25th Ave. alignment. The frontage roads were built first, with room between them for the eventual freeway.

The first part of construction started in 1954, with the construction of the Grand Ave. (US 60/70/89 AZ 93)/Thomas Rd. interchange (diagram, 423K). It appears that the interchange was done by early 1957. At that point, construction was well underway on the rest, with the McDowell Rd. to Dunlap Ave. leg opening November 1960.

The original concept for the route through Phoenix was to extend the AZ 69 freeway south then east to meet AZ 87 in Mesa. During construction of the east-west leg, called the Maricopa Freeway, TEMP AZ 69 was designated along 19th Ave. to Baseline Road and then along Baseline to AZ 87.

Once the Interstate plan was adopted, the east-west leg became part of I-10. Later, I-10 would be moved north, but that's another story. 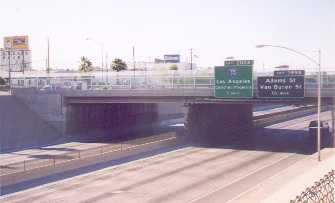 The early construction used box viaducts like these, with the steep slopes covered by concrete. The pedestrian cage was a later addition. 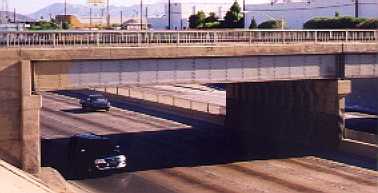 The Southern Pacific rail crossing still has the original railing.

This early design had its faults. The southbound Thomas Road bridge had a clearance of only 13´ 6", making tall trucks a real problem. As early as 1963 two beams had to be replaced because they had been bashed by a truck. A height sensor and electric message board was installed south of Indian School Rd. to warn tall trucks to exit.

Another problem was the lack of merging space. Although there was a southbound on-ramp between Thomas and Grand, it was difficult to use due to the lack of a merge area. There were gates to keep traffic off it during rush hour. Because the frontage road had a break at Grand Ave., cars had to detour to 19th Ave. or 27th Ave. to get back to the freeway.

Yet another problem was drainage. Although it doesn't rain often in Phoenix, when it does it comes down hard. The pumphouses were located at the bottom of the underpasses, so if they didn't pump fast enough they would be flooded and stop entirely.

All of this was swept away in the 1980s during the construction of the "stack" interchange with I-10. The Black Canyon lost its connections to Grand Ave., but by that time I-10 was the thru route, not US 60. The old loop ramp area is now a catch basin for water pumped out of the underpass. 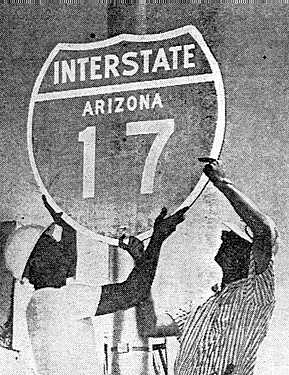 I'm not sure of the exact date the Black Canyon was adopted into the Interstate system and assigned the number I-17. This sign was put up around 1965.

During the I-10 construction, the Black Canyon was also reconstructed from Thomas Rd. to Van Buren St. The rest was essentially untouched since its original construction. There was a project to replace the center curb and median with a jersey barrier and sloping curb in the early 1970s, and the interchanges were given new traffic lights and more left turn room.

Finally, in 1998 a project got underway to widen I-17 from Indian School Rd. to Peoria Ave. A lane on each side was taken from the frontage road and given to the freeway. Along with eliminating the landscaped areas between the freeway and the frontage roads, this gave enough space for two more lanes.

All of the overpasses have been replaced with wider, taller structures. Here's before and after pictures, from 1969 and 2001: 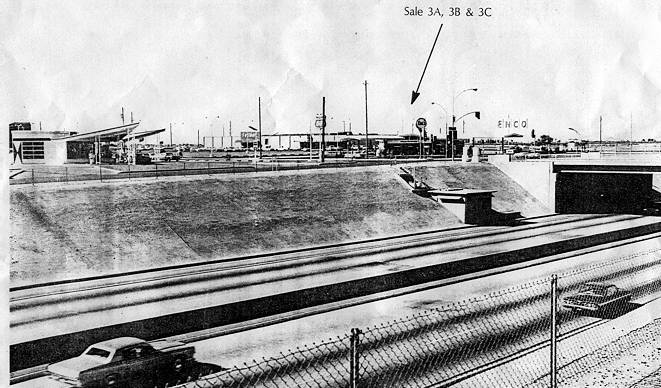 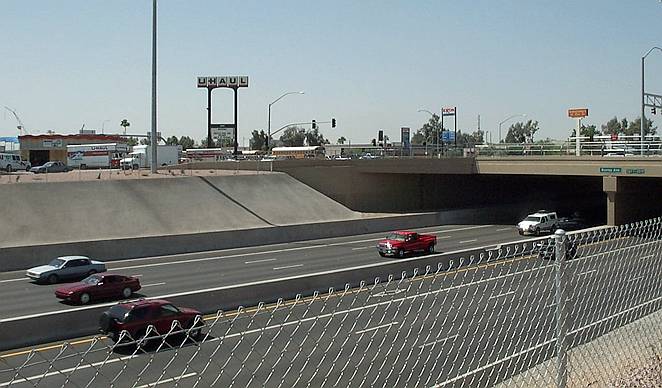 This is at Dunlap Ave. The 1969 picture is from an ADOT economic impact study. The 1969 picture shows the then-new center lanes and jersey barrier. This has a square curb separating it from the traffic lanes, which would be changed to a ramp a few years later. A glare fence along the top of the wall would be added too. The Phillips 66 building is still there, albeit with the canopies removed, as a U-Haul. The original Enco building (now Exxon) is long gone, and the FedMart went out of business. A new Toys R Us is on the site.

The freeway itself was widened by replacing the old box viaducts, and taking bites out of the embankment. The small center median space was eliminated, and the lanes were narrowed. Between interchanges where the right-of-way was narrower, the two-lane frontage roads were converted to one-lane, with the freeway getting the extra space as an auxiliary lane.