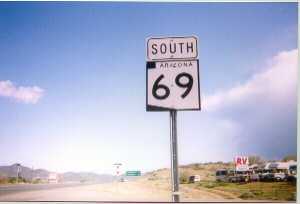 Although the alignment has changed over the years, this road has served as a route from Phoenix to Prescott for over a century. You can see one of the original alignments clinging to a cliffside to the west of I-17 as it climbs north of Black Canyon City.

The remaining leg from Cordes Jct. to Prescott has been reconstructed as a 4 lane parkway. Still, with the continuing growth in the Prescott area, more capacity will be needed. North of town, the Airport Connector is a freeway-grade road which will take over part of AZ 89A's alignment. There have been suggestions to extend it all the way back to I-17. Closer in, Prescott is constructing the Prescott Lakes Parkway to go around the congested AZ 69/AZ 89 interchange. 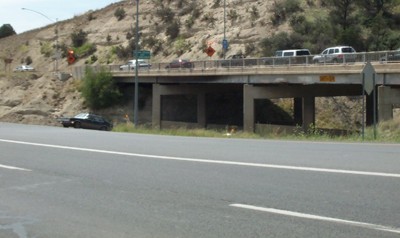 The 1952 interchange is scheduled for replacement in 2004. 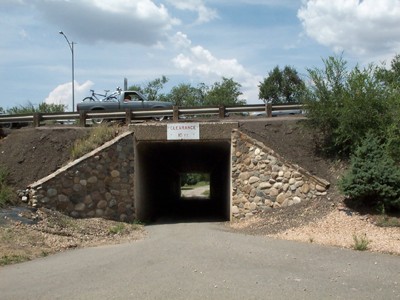 A little-known part of this interchange is the access road to the veteran's cemetery just south of the interchange. The access road is wedged between the WB AZ 69 to NB AZ 89 ramp and mainline AZ 89. It crosses under the highway via this culvert.

The four-laning straightned AZ 69 considerably, so there are still bits of the old highway in use as access roads. Between Dewey and Mayer there is a grade visible along the highway. This wasn't the old highway; it was a rail spur going from the main line north of Prescott to Cleator and Crown King. At one time, mining was a big activity in this area. A smelter's smokestack still towers over Dewey.

Part of AZ 69 still exists as Business Loop I-17 in Black Canyon City. 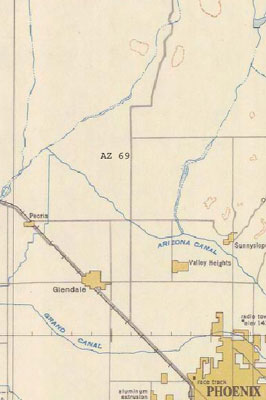 AZ 69 took a different route out of the Phoenix area prior to 1950. It began at Grand Ave. (US 60/70/89) and 43rd Ave. It followed 43rd Ave north to what is now Yorkshire Dr., then jogged east to 35th Ave. It then went north to Pinacle Peak Rd. and angled east through what is now a landfill, meeting the current freeway at Happy Valley Rd. (Map: NOAA)

Baseline Road in Phoenix from 19th Ave. to AZ 87 was designated TEMP AZ 69 while I-10/I-17 was under construction.

During the construction of Boulder Dam (now Hoover Dam), the road from Kingman was known as AZ 69. When the dam was complete in 1936, the number was moved to the Phoenix-Prescott route.