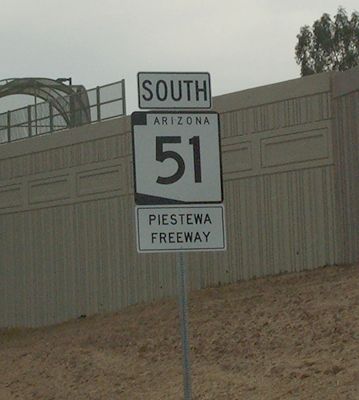 This is the only new freeway to be built through central Phoenix, other than I-10. There was to be a companion route AZ 50 but that was cancelled. This freeway, the Piestewa Freeway, serves as a main north-south route through the middle of town, circling around its namesake peak.

The original segment from McDowell Rd. to Glendale Ave. was originally built by the city of Phoenix, and turned over to ADOT. It was not up to state standards, and ADOT has made some modifications. It is now four lanes each way between Thomas Rd. and I-10/AZ 202, and ADOT removed all the landscaping in the median, replacing it with a triple cable fence. 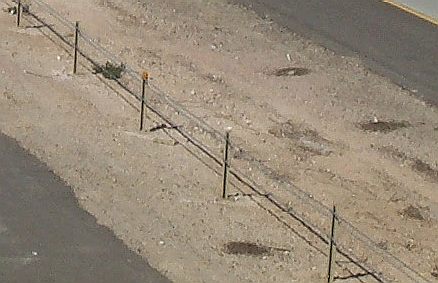 In 2003, it was renamed from Squaw Peak Parkway to Piestewa Freeway in honor of Lori Piestewa, who was killed in Iraq. 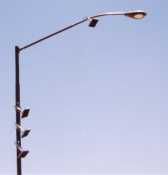 The Piestewa Freeway uses sonic sensors to measure traffic flow, rather than the usual inductive loops cut into the pavement. 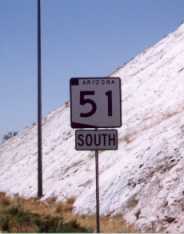 This picture shows an unusual marker; normally the directional caption is on top, not on the bottom. It has since been replaced with a conventional arrangement.

The exit numbers are arranged better than they were before the 2003-2004 rebuild, but there are still some problems. Exits 2 and 3 are actually in mileposts 1 and 2. The soutbound numbering for Bethany Home Rd. and Colter Ave. was backwards originally, with Bethany Home as 4A and Colter as 4B. Colter has been fixed, but the A was just peeled off the Bethany Home signs. This should be changed to 4B to match the northbound exit. Also, there's one overhead sign that still says Bethany Home is 4A.

The new southbound HOV ramp to I-10 East doesn't have any signs that identify where it goes.