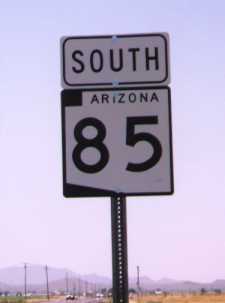 Current route: JCT I-10 near Buckeye to Mexican border at Lukeville
Historic route: Gila Bend to Lukeville (but see below)

This route has expanded and contracted over the years, to cover the decertification of US 80 and the construction of I-10. When US 80 was cut off at Benson, AZ 85 was extended to Phoenix. After I-10 was completed into Phoenix, the segment from Buckeye to Phoenix was decertified. 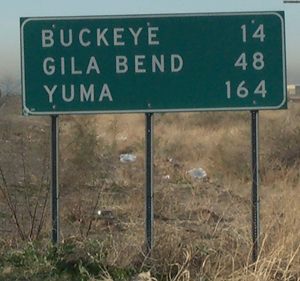 These signs are along the old route of AZ 85 from Phoenix to Buckeye. Although the road is no longer a state highway, these ADOT signs are still there. It's not mentioned on the sign, but this was the preferred route to Los Angeles as well between 1972 (when I-10 reached Tonopah) and 1978 (when it was extended to Litchfield Rd.).

ADOT is currently widening the highway to 4 lanes divided between I-10 and I-8. 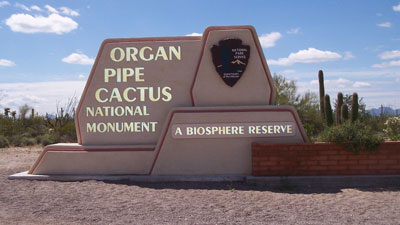