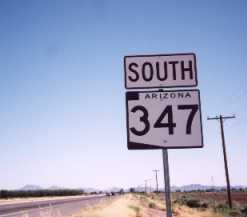 Current route: JCT I-10 near Chandler to JCT AZ 84 near Stanfield

Maricopa Road was a two-lane county road, but has been upgraded into a wide four-lane divided state highway. This doesn't seem to be a major transportation corridor -- there are certainly places where such a reconstruction are needed much worse. US 93, for example.

The number is simply the Federal Aid Secondary route number assigned by the FHWA. All though all the Federal Aid routes have these numbers, this is the only case where the Arizona route number is the same. (Except for the Interstates.) Normally, 347 would indicate the 3rd branch of AZ or US 47, but there is and never was such a route in the state. AZ 143, 153, and 238 have the same problem, but they don't have the same answer.