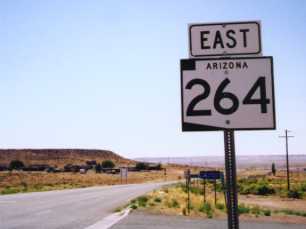 Current route: JCT US 160 at Tuba City to Window Rock at NM border

This road crosses the heart of the Navajo and Hopi reservations.

Note the "skinny font" marker (at JCT AZ 87), where 3 digits have been squished into a 2 digit outline. This is common on older signs in northern Arizona.

The mesas and wide-open vistas on this route are breathtaking.

Old Oraibi is the oldest continuously inhabited settlement in North America. Estimates vary, but the founding is believed to fall between 1000 and 1200. (There's no photo of the town out of respect for their privacy.)

Tuba City was named after a Hopi chief, and means "pine tree".